The vegetation in Parnitha is the result of the interaction of many factors and mainly the flora, the general climate, the orographic formation, the petrological and geological composition, the soil, but also the human influence, which appears in the historical development and economic structure of the region. The vegetation changes as the altitude varies.

In Parnitha there are three vegetation zones:

The vegetation of Parnitha was severely damaged during the fire that broke out in the Forest on June 28, 2008. According to data from the Parnitha Forest Service, a total of 21,800 acres of Kefalonian spruce forest were burned, 10,561.98 acres of 3.0.2 acres of pine trees.

The different habitats that we can find in Parnitha are the following:

The area occupied by this type of habitat in the peaks of Parnitha is small and is located just 5 – 10 m above the fir forest. At present, the peaks in which this vegetation can be seen are Kyra, Air, Navy and Xerovouni. It consists of herbaceous and shrubby species, the most important of which are: Astragalus angustifolius, Sideritis raeseri subsp. attica, Asperula pulvinaris, Asperula rigidula, Asperula baenitzi, Dianthus serratifolius subsp. serratifolius, Cerastium candidissimum, Tulipa sylvestris, Sedum album, Sedum urvillei etc. Most of these plants are endemic or rare and are threatened by installation on the tops of radio antennas and camps, which have occupied the entire upper ridge. The distinguished syntaxon is Astragalus angustifolius comm.

The specific habitat is dominated by the species Juniperus oxycedrus, which also gives the physiognomy to the landscape. The total flora of the habitat is very rich in species, many of which are endemic. In most cases the formations with Juniperus oxycedrus have a meadow appearance, with a relatively sparse to dense appearance of thorny shrubs (coverage 15-80%), where the floor of the shrubs is up to 4 m high. In some places, in some areas, a Sparse tree floor. The habitat has emerged from the degradation of the Kefalonian spruce forest, from which it is under intense pressure, so that it is often an intermediate pre-forest stage. This habitat is also under pressure from anthropogenic interventions and activities located at the top of the mountain (military installations, casino operation, radio and television antennas). The vegetation unit that represents the habitat is referred to as Juniperus oxycedrus comm.

Garrigues of the Eastern Mediterranean

It is an endemic habitat of our country. It concerns low-medium and super-Mediterranean shrub formations of Greece. It is a strongly degraded forest stage, where intense grazing is practiced. The syntaxon that was distinguished is Quercus coccifera comm.

This habitat is a product of degradation of evergreen deciduous forests and consists of thorny formations, hemispherical shrubs, and mainly Sarcopoterium spinosum and Genista acanthoclada. The most important factors that caused the degradation are mainly overgrazing and secondly the frequent fires. It has a very high spreading capacity in areas where crops are abandoned. Its composition includes many phrygana plants of the thermo-Mediterranean zone, such as Coridothymus capitatus, Thymus sp., Cistus creticus, Cistus salvifolius, Hypericum empetrifolium, Salvia triloba, Erica manipuliflora, Calicotara villosa, Ascipusus Ballus, Asc. These formations are very important, as they protect the soil of the areas where they grow from erosion and are a habitat for many species of reptiles. They also usually include in their composition a high number of endemic and important species, such as the Parnitha orchids. In terms of their structure, the Phrygan community with Sarcopoterium spinosum consists of the shrub layer 0.2 to 0.9 m high, with different percentages of vegetation (20-100%). The vegetation cover of the herbaceous vegetation ranges between 5 and 30%. The distinguished syntaxes are Sarcopoterium spinosum-Coridothymus capitatus comm and Phlomis fruticosa-Euphorbia acanthothamnos comm.

This habitat includes the vegetation of limestone rocky outcrops and cliffs. It is distinguished mainly by physiognomic criteria. It consists mainly of herbaceous plants with coverage of 5 – 25%. Its flora includes several endemic plants, such as Campanula celsii subsp. parnesia, Silene oligantha subsp. parnesia, Inula verbascifolia subsp. methanea, Silene corinthiaca, Scutellaria rupestris subsp. parnassica et al. This type of habitat does not seem to be directly threatened by any danger. The distinguished syntaxes are Inula parnassica-Ptilostemon chamaepeuce comm. and Inula parnassica comm. 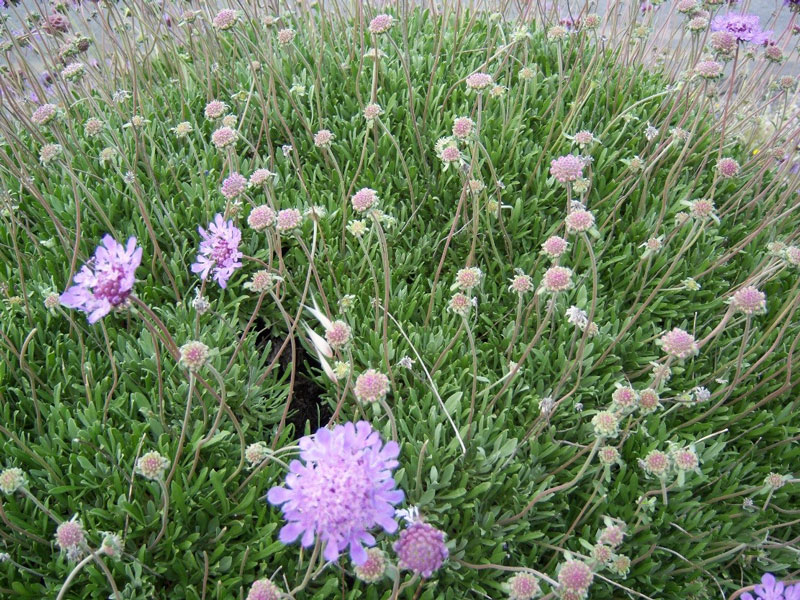 Thermophilic oak forests of the Eastern Mediterranean and the Balkans

In Parnitha there is no pure oak forest, but remnants of past vegetation from deciduous oaks. At Metochi there is a small population of tame oaks (Quercus ithaburensis ssp. Macrolepis), while in the area of Katsimidi there are downy oaks (Quercus pubescens), mixed to varying degrees with pine and fir. The distinguished syntaxon is Quercus pubescens comm.

In Parnitha, this habitat includes formations dominated by holly (Quercus coccifera). Appears at low altitudes. The syntaxon that was distinguished is Quercus coccifera-comm.

This habitat type is a degraded form of tree-lined Mediterranean shrub, although in many cases it retains its dense structure. Although it is usually timber, it nevertheless has almost all its characteristic thermo-Mediterranean elements. It looks like a stable habitat. Its importance is great, because it is a first-class protective mantle of steeply sloping soils. The harvest of the semi-dendritic floor reaches many times up to 100% of the soil cover, presenting excellent trunk depth. Shrubs are usually tall and very dense when the semi-woody floor is missing. The appearance of herbaceous vegetation is extremely poor. This habitat type is in good condition despite the losses it suffered after the fire of June 2008. The syntaxes that were distinguished are Arbutus adrachne-Quercus ilex comm. and Erica arborea-Arbutus unedo comm.

This habitat type includes plane tree stands, which are found on the banks of streams, usually of periodic flow.

The fir forest of Parnitha consists exclusively of Abies cephalonica individuals. Prior to the June 2008 fire, it covered an area of ​​approximately 30,000 acres. In the Kefallinian Fir forest of Parnitha, necrosis of trees has been observed, the extent of which varies in intensity over time. The most recent of these were recorded during the years 2000-2002, where hundreds of thousands of trees died (Tsopelas et al., 2003). The main causes of necrosis of spruce trees are drought, infestation of trees with bark-eating (Phaenops knoteki, Pityokteines spinidens) and leaf-eating (Choristoneura murinana) insects, fungi (Heterobasidion abia, Armil, and Armil), τον ιξό (Viscum album). Some abiotic factors, such as exposure, altitude and soil, also play an important role. In particular, the growing conditions of the spruce are better at high altitudes, in deep and fertile soils, while on the contrary in poor and shallow soils the growth of trees is limited. We also have better growth in the northern fairs, where humidity conditions are more favorable for the fir. On the contrary, in the eastern, southern, SE and SW exposures, which receive more sunlight and are drier, the necrosis of trees occurs to a greater extent, especially in the low altitudes of Parnitha, where the temperature limits of the fir (Tsopelas et al. , 2007).

To help the regeneration of the fir, the Forest Service of Parnitha planted black pine (Pinus nigra), which provides shade to the fir and thus contributes to its regeneration. The black pine does not compete with the fir, as it is outside its limits of spread and cannot be regenerated. The main species that grow in the glades of the fir forest are Juniperus oxycedrus ssp. oxycedrus, Rosa canina, Rosa sempervirens, Berberis cretica, Crataegus heldreichii, Crataegus monogyna, Prunus webbii, Prunus spinosa, Pyrus spinosa, Bellis sylvestris, Doronicum orientale etc. The syntaxes distinguished in this habitat type are Helictotrichon convolutum-Abies cephalonica comm., Abies cephalonica comm. and Abies cephalonica-Lilium chalcedonicum comm.

The pine forests of Parnitha extend peripherally of the mountain mass and consist exclusively of Aleppo Pine (Pinus halepensis). During the years 2002 and 2003, extensive tree necrosis occurred in the Aleppo pine forest in the peripheral zone of the Forest, which continues to this day at a steady pace. These necrosis was observed after a dry period that occurred in the hydrological years 1999-2000 and 2000-2001. This phenomenon is directly related to the presence of the insect Marchalina hellenica. The degree of infestation of pine trees by the insect M. hellenica had a significant effect on the weight of the needles, but also on the concentrations of calcium, potassium, phosphorus and manganese in the plant tissues of needles this year (Tsopelas et al., 2008). The necrosis of Aleppo pine trees is also associated with the presence of other pathogens. Such are the bark-eating insects Orthotomicus erosus and Crypturgus cinereus, the fungus Ophiostoma ips, which is a weak pathogen in the pine species, the nematode Bursaphelenchus xylophilus, which is also considered a weak pathogen, as well as the fungus Phelli of old trees, while it is rare in young trees (Tsopelas et al., 2008).

The pine forests of the Parnitha National Park have always been resin, grazed and timbered. The basement was felled for the production of charcoal and the operation of lime kilns. This management in combination with the frequent fires and the poor, shallow soils of the area, determined their current structure. Not many species of plants grow in this type of habitat, due to the dense layer of pine needles that falls to the ground and remains unchanged for a long time. Among the species found on the herbaceous floor many are bulbous, such as cyclamen (Cyclamen graecum, Cyclamen hederifolium) and orchids (Ophrys lutea, Ophrys tenthredinifera, Orchis italica, Orchis quadripunctata). The forests of Aleppo pine were classified in Pinus halepensis – comm. 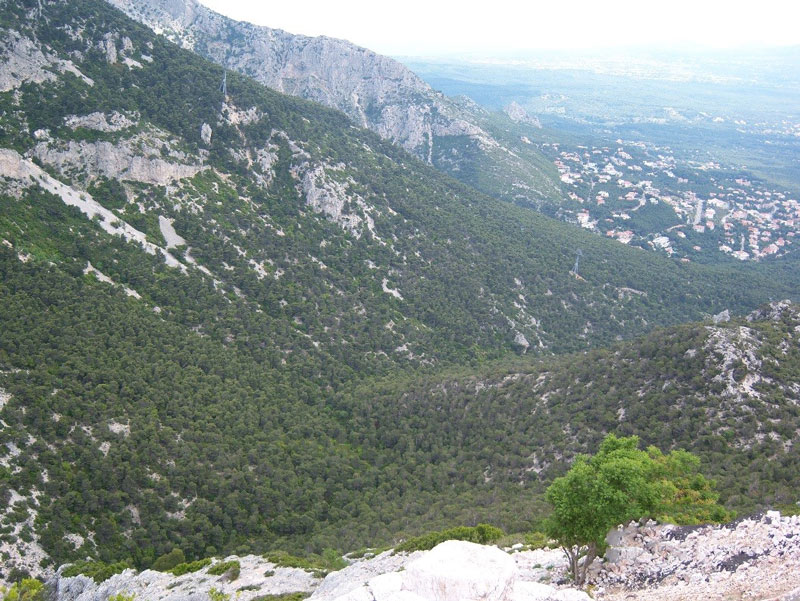 View of the Aleppo pine forest